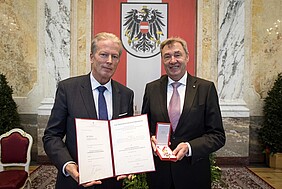 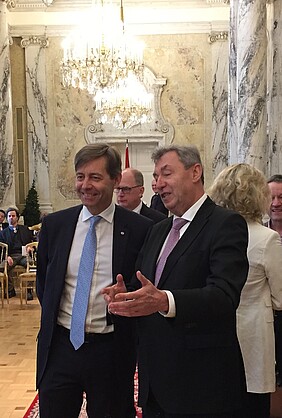 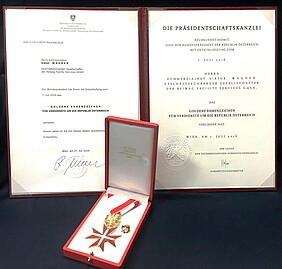 At the instigation of the Austrian Federal President, with the resolution of 7 July 2016, Vice-Chancellor and Federal Minister Dr. Reinhold Mitterlehner presented the “Decoration of Honour in Gold for Services to the Republic of Austria” to Mr. KR Viktor Wagner on Tuesday, 21 February 2017. The ceremonial act took place at the Federal Ministry of Science, Research and Business.

Everyone is entitled to suggest the bestowal of the Decoration of Honour in Gold for Services to the Republic of Austria (except for themselves or for close family members). *

Federal President Dr. Heinz Fischer emphasized the importance of applying this distinction to a strict standard in order to comply with the will of the legislature, according to which the Decoration of Honour is to be awarded to those persons who provide outstanding charitable contributions to the Republic of Austria and / or rendered excellent services.*